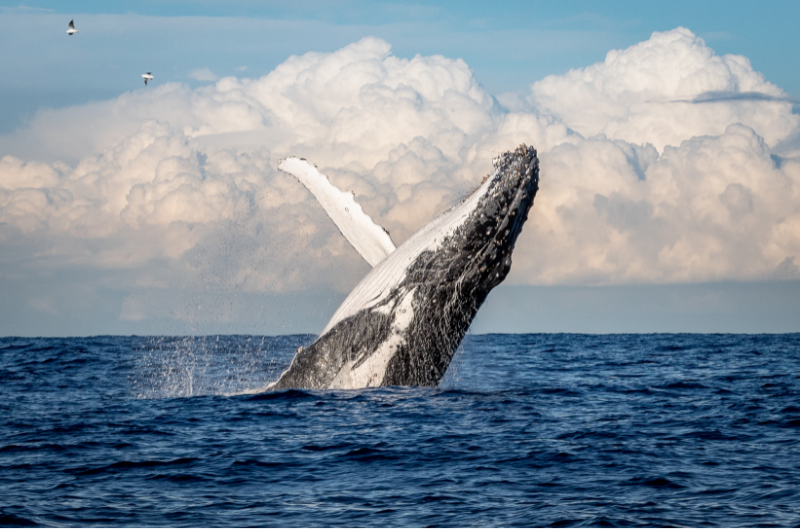 Often when we receive environmental news, it’s to remind us that humanity will experience a major crisis if we don’t get our act together, ASAP.

And for good reason.

The oceans are warming, emissions are high, and we’re teetering on the perpetual edge of natural disasters.

And while it’s totally necessary to listen to the warnings, it’s also okay to take a step back from the dreaded news cycle, too.

Actively consuming good environmental news may even inspire us to follow suit and work towards a healthier future.

So, read on to enjoy some positive environmental news from 2022.

Following an assessment by the Threatened Species Environment Committee, the Australian government announced that the humpback whale has been removed from the threatened species list.

Globally, the humpback whale was nearly hunted to extinction by commercial whalers.

At the peak of commercial whaling, the humpback population dipped to an all-time low of 1500.

In 1979, Australia adopted an anti-whaling policy and has since made other conservation efforts to replenish the humpback population.

One Tree Planted is a non-profit that aims to positively impact reforestation efforts by planting trees around the world.

They partner with organizations (including UCA!) to help them plant trees, host reforestation events, and positively impact the planet.

In 2022, they have begun planting over 500,000 trees on three continents (North America, Europe, and Australia).

Fishing around the Galapagos is big business, totaling over a billion dollars in export per year.

This big business comes with big waste, in the form of fish silage (liquified fish skin, heads, and guts).

As an alternative to disposal, scientists at Conservation International suggested turning the waste into fertilizer and animal feed.

Fish silage is calcium-rich and has shown promising results when used to grow to produce.

The commercialization of fish fertilizer may increase economic opportunities for families.

This maximizes profit and sustainability.

It may also lessen reliance on exported food and fertilizer, limiting the risk of invasive species.

The Oregon Department of Transportation has swapped out 8,000 old streetlight fixtures with LEDs.

The new lights will require 50% less energy than traditional lighting and reduce carbon emissions by 3500 metric tons per year.

The lights are also dark sky friendly, meaning they won’t cause glare or excessive light pollution.

Nocturnal animals may be particularly affected, with interruptions to hunting, mating, and migration patterns.

The upgrades will reduce maintenance costs, as the bulbs only need to be changed every 15-20 years.

The Senior Judge of the United States District Court for the Northern District of California has instated federal protection for gray wolves across a large part of the U.S.

In the past, gray wolves were hunted and poisoned to near extinction.

Populations have slowly been revived with conservation efforts.

Once, gray wolves inhabited the majority of the country, but now only exist in the western Great Lakes region, Northern Rockies and Pacific Northwest.

Conservationists hope to continue protecting the species so that it can expand its populations into other states.

No doubt, the declining health of the Earth is distressing.

But our lives depend on the environment and the resources it provides; we must ensure its sustainable survival.

6 Communication Blockers and What to Do Instead

6 Self Care Tips to Make the Autumn Awesome

5 Common Scams (and How to Avoid Them): A Quick Guide for Seniors

3 Benefits of Musical Instruments for Overall Health and Wellbeing